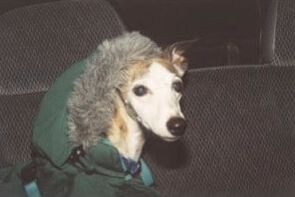 The Story of Sissy Dog®

The term “Sissy Dog®” was first used in my act about 8 months before a real sissy dog showed up on my doorstep in Las Vegas in 1993.  It was Halloween, and I arrived home late at night after a performance at the Maxim hotel, and there, in front of my door was a most unusual dog.  Lanky and streamlined, she was hopping on three legs. Her right, rear leg seemed injured but there was no sign of trauma. So I opened the door to my ground-floor apartment and in she went.  The only food I had in the house were some Veggie Burgers.  She was obviously more hungry than politically correct for her species, so she gobbled them down, then proceeded to leap onto the sofa and fall asleep.  I was awakened in the morning by an obviously stressed and disoriented canine who wanted out.  As there were no signs of outward physical trauma, I figured she would be okay on her own. So I opened the door, hoping she would find her way home,  and out she hopped.

When I returned home from work that night, there she was again. This time she turned her nose up at the food but took refuge on the sofa.  As she obviously didn’t know her way home, I decided to search out her owners.  A trip to the local animal shelter and a call to the animal control office yielded nothing.  An ad in the paper also offered no hope of reuniting dog with owner.  So for now she was mine.  I took her to a veterinarian who diagnosed a broken pelvis as the cause of her three-legged gate.  The cause: most likely the result of a blunt force such as being kicked.  This injury, along with the many scars on her body and her cringing behavior when approached, led me to believe that she had been abused and abandoned.

The treatment for her pelvis consisted of bed rest.  I was to carry her outside to go to the bathroom and restrict her movements as much as possible.  It didn’t seem likely that the dog would heal, but within three months she was racing around the apartment grounds.  I was growing attached to her but was still unsure if a dog was a good idea at this stage of my life. But I named her Bleu [sic] because she was sad when I found her, and we both settled into figuring out if this was a good match.

A consulting job with The Minnesota Zoo forced me to leave Bleu with some friends who were rather fond of her.  However, a lapse in judgement on their part resulted in Bleu escaping into the neighborhood while I was away.  On my return I was frantic with re-locating this dog.  Not because I felt she belonged with me, but because I feared that someone wouldn’t understand her special needs.  Whippets are extremely short haired and low on body fat.  This makes them highly sensitive to cold temperatures.  It was a nagging fear that this dog, which I had taken the responsibility to care for, would be fenced in someone’s back yard or worse, chained outside on these cold winter nights.  I plastered the neighborhood with signs and placed an ad in the newspaper, but received only one response.  It was from a young lady who said that she had seen a dog fitting Bleu’s description hit by a car and killed.  Although I went to the location where she said the accident occurred, I could find no body of a dog.  Since I didn’t have definite proof, I continued my search hoping that perhaps she was mistaken.

About three weeks after Bleu went missing I received a phone call from a family in Blue Diamond, Nevada saying they had found a dog running along the major street that ran through the area.  Since their location was nearly 30 miles and on the opposite side of Las Vegas from where Bleu disappeared, I wasn’t very hopeful.  But after further discussions with the couple, it seemed like it was worth the drive to take a look at the dog.  The family was very nice and invited me into their home.  There on the sofa, seated between father and son was Bleu.  She took just a  second to recognize me, then flew off the sofa and jumped at me, dancing around and licking my face.  It was one of those surreal moments when time stops and you just can’t believe that you have  recovered something so precious.

From that moment on, Bleu and I were inseparable.  Even when I moved to Branson and had to live in a tent for several weeks because I couldn’t find an apartment that would accept pets, Bleu trusted that I would take care of her.  She accompanied me to work every day and became a true “theater dog.”

She loved to ride in the car and explore.  We traveled together making several trips between Vegas and Branson, as well as traveling to Florida, southern Texas,  Tucson, and even Yellowstone and Rocky Mountain national parks.

Eventually Bleu joined me onstage performing in comedy sketches and taking a bow at the end of the show.  She would hear her cue over the intercom in the dressing room, stand at the door and wait for the stagehand to attach her leash and walk her down the stairs to the stage.  She would perform her bit, then scamper back up the stairs on her own, go to the dressing room, sit in her bed and wait for me to return.  And she did this all without any training or rehearsals. Darn smart dog.

Unfortunately, dogs don’t live as long as humans, and in the end Bleu lost both her eyesight and hearing.   My relationship with Bleu ended the way it started... with me carrying her outside to go to the bathroom. This once athletic and energetic dog was reduced to being carried everywhere and simply stood when put down, since she could not navigate due to blindness.

One day she started bleeding internally and after a week of going undiagnosed by the vet, she stopped eating and drinking.  I think she finally gave up.  She had been through a lot in her life, but I could tell she no longer had the strength nor desire to continue. She had overcome being abandoned and abused by her former owners, having been lost for three weeks, and overcome leg injuries, and her broken pelvis, but she seemed to lose the desire to conquer life anymore.

I was faced with an awful decision.  Bleu never liked to be alone.  And although the vet said that she might last a few more days, my biggest fear was that she would be alone when she died... that I would be onstage performing.  So I made the toughest decision of my life and chose to be with her at the end. I wanted her to know that she was loved and that I would never abandon her.  A painful decision for me but a peaceful one for Bleu. She lay quietly in her bed, and didn’t even flinch as the veterinarian inserted the needle.  I stroked her head so she knew that I was there, and she quietly passed away.

Bleu was in my company for 12 years and the best veterinary guess was that she was five years old when I found her.  Bleu is buried in my side yard, in a sunny place since basking in the sun was one of her favorite pastimes. I still visit her and think of all that she brought to my life.  A special dog.  A special friend.  A gift in this life that I will never forget.

I am glad that she found me. 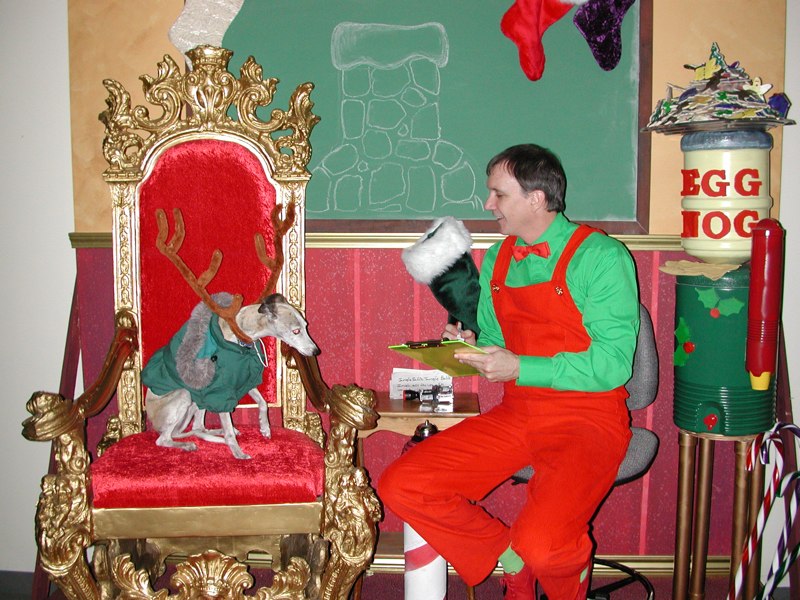